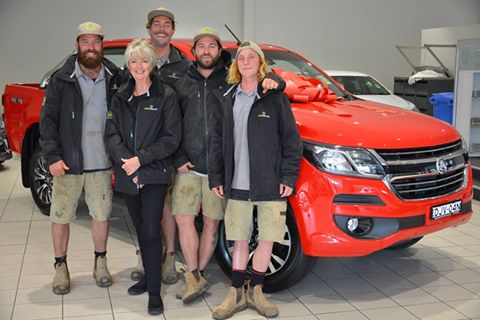 Watch how Holden reinvented the truck stop in their 30sec ‘Truck Swap’ TVC, and visit us at our Holden dealership and check out the new Holden Colorado for yourself.

Want to know more about the Holden Colorado Truck Swap? With the New Colorado, Holden has reinvented the truck. To see what people thought of it, they reinvented the truck stop. Numerous potential buyers included farmers, a personal trainer, a young family and a few tradespeople put the Colorado to the test and the feedback was overwhelmingly positive. The concept was, “Would you swap your current truck for a Colorado?” Local tradie’s Ben Heffernan and Nick Abba of Northern Beaches business Lux Landscapes rose to the challenge and took part in Holden’s truck stop television commercial.

Filming for the ad took place in Canberra and the thought of being on set and part of the project was exciting plus a little daunting for the boys. Day to day Ben & Nick pride themselves on their quality of workmanship and exceeding the expectations of their clients with outstanding customer service in their busy landscaping business. Movie stars they are not! After taking the car for a test drive and a day of filming, the boys were on a high. “It’s a day we won’t forget in a hurry,” said Nick.

When filming was wrapping up, Ben was asked, “So would you swap your current Toyota Hilux for the new Holden Colorado?” Ben’s response was “YES!!” Thinking it was all still part of the ad, the penny didn’t drop until the keys were thrown his way and all the crew & extras on set started to clap. “It was surreal, Nick and I just looked at each other in amazement. It was such a great day & experience and we are now thrilled to take delivery of the car and can’t wait to have it signwritten for our business and get it to WORK,” said Ben.

The boys proudly took delivery of their BRAND NEW Colorado in Absolute Red, courtesy of Holden Australia. Their 4×4 Crew Cab Pick Up LTZ Manual will turn heads especially with these larrikins behind the wheel! “A HUGE thank you to Holden of course and everyone involved with the Truck Swap and Col Crawford Holden for looking after us. It’s been such a ride and we are so thrilled,” said Nick.