Col Crawford Holden dealership Sydney are delighted to be involved with local Northern Beaches Netball, through our support of the Anne Sargeant Netball Clinics, and we are pleased to announce that we would be awarding a  Col Crawford scholarship.

The Col Crawford scholarship enables the recipient to attend the prestigious week long ASNC camp in January. After a full days netball clinic, Anne chose the  girl she felt was most deserving of the scholarship – based on ability and attitude. Phil Ward, Dealer Principal of Col Crawford Holden, was on hand to award the scholarship to Leah, who is looking forward to attending in January.

Over the 2 day camp, all girls and their parents were invited to enter a Cruze-y weekend competition, with the lucky winner drawn at the conclusion of the awards ceremony – with Jordan winning a wonderful weekend for her family, which included a Cruze for the weekend plus a family lunch at Cottage Point Inn. 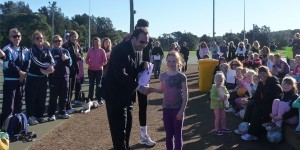 Cruze-y weekend winner – her Mum will be happy with her!