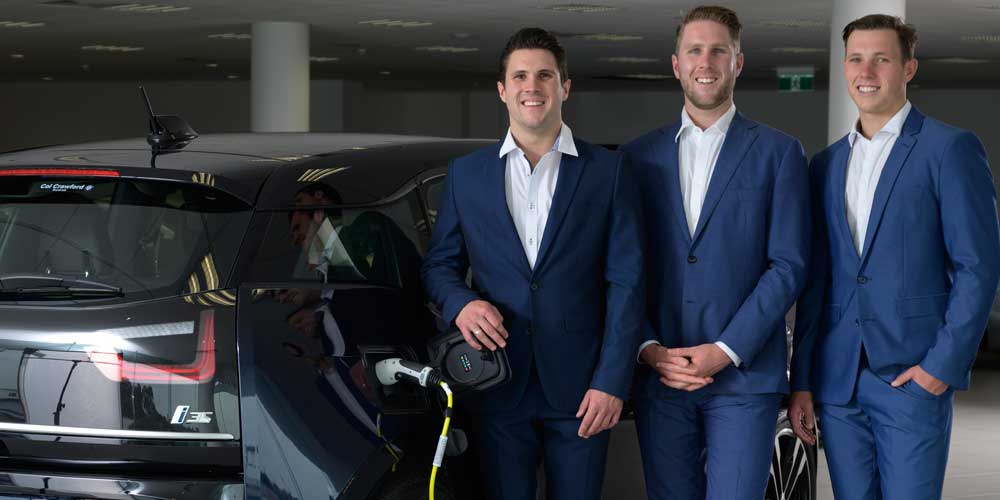 This article on the electric car market originally appeared on the The Driven.io website and was written by Bridie Schmidt, staff writer for The Driven, and Renew Economy.

An advertisement plastered on the front page of Sydney’s Manly Daily newspaper this weekend has sent a charged message to drivers on Sydney’s Northern Beaches, and a signal to the whole country: the age of electric mobility has arrived, and there’s no going back.

Established for 50 years and one of Australia’s largest independent car dealer franchises, Col Crawford Motors has set up a specialised area at its Brookvale showroom where it will showcase what it believes is the widest selection of all-electric and hybrid cars at any given location in Australia.

To celebrate the push into electric mobility, Col Crawford Motors – located in the heart of Tony Abbott’s Warringah electorate – is hosting an open day this Friday at its Brookvale showroom and welcomes drivers to register their interest to attend.

Attending the do will be Northern Beaches mayor Michael Regan as well as MPs Jason Falinski and Brad Hazzard, who Crawford says are supportive of the move to zero emissions transport.

Overseen by Stephen Crawford (son of founder Col Crawford), the dealership has installed three EV chargers and is stocking electric and hybrid cars made by Hyundai, BMW and Renault. The Nissan Leaf might also have been included, but for Crawford losing the dealership rights to Nissans last year.

Still, the switch to electric is a sign that times are changing, and fast. As Stephen Crawford tells the Driven, he considered starting the push to go electric 18 months ago but decided then that it was too soon. “People want to own the tech, but [back then] there wasn’t enough that delivers what they need – that’s all changing now,” he says.

With the recent introduction of the Hyundai Ioniq – Australia’s first EV priced under $A50,000 – and its stablemate the Kona Electric set to arrive here next month, Crawford has decided the time is ripe.

“The volume is not here yet but we have consciously decided that the market is moving that way and we want to be in that market,” Crawford says.

“There’s a momentum that’s just going to keep on building. The market wasn’t reacting before because there were no real, fair dinkum models on the market – the range too small, or they were only small, funny cars – but now there are more serious cars with more practicality and better range,” he says.

While Col Crawford Motors already have the Renault Zoe and Kangoo (they are to his knowledge the only dealership in NSW selling all-electric Renault vehicles) as well as the BMW i series, it’s the arrival of the electric Hyundai models that has concreted the way forward.

“The reason is for the big push is that we have a brand new Hyundai showroom and the Kona EV is on the way,” Crawford says.

While the arrival of the Ioniq has certainly been met with enthusiasm, Crawford believes the Kona EV will be a game-changer.

“The Kona, being a small SUV, that’s the segment that’s going better these days,” he says, adding that interest will likely continue to grow now that drivers can come down to the showroom and see, touch and learn about the electric cars on offer.

If some are still hesitant about the range of electric cars (often cited as a barrier to uptake of EVs), Crawford is keen to point out how much the technology is improving.

“The technology and battery life and range is getting better, and the ability to regenerate own power [while driving] is getting better through different driving techniques,” he says, referring to the ability of modern EVs to recoup lost energy through a braking system that recharges the battery.

“Better understanding of the technology is making it more likely that people will accept them for what they are are, that they can drive 400km without a charge,” he says. The day-to-day reality for most drivers – particularly city-dwellers – is that an electric vehicle with 400km charge would only really need to be charged maybe once a week.

Many EV drivers in fact charge their cars at home, preferring to keep their battery in the “sweet spot” of 20-80% charge.

That said, there are increasing numbers of fast chargers and destination chargers being installed thanks to programs such as that being conducted by the NRMA.

Col Crawford itself has installed some EV chargers:

“We have three different charging stations, one is very accessible to customers who want to plug their car in,” Stephen Crawford says – and while the other two are there to charge cars in stock, Crawford says he is open to an agreement with a third party should they want to add a publicly accessible station.

As for sales and service, Crawford says that the automakers have been helpful in bringing his staff up to speed, including specialised training for mechanics to ensure they can service EVs efficiently and safely.

That said, Crawford points out that “Servicing electric cars is completely different [to petrol and diesel cars] – there’s far less work and far less parts, and no oil to change.”

This week Col Crawford staff will also be educated on the ins and outs of solar panels and battery storage – the next logical step for many buyers who have both being to buy an electric car.

This article originally appeared on the The Driven.io website and was written by Bridie Schmidt, staff writer for The Driven, and Renew Economy. She specialises in writing about new technology, as well as using her technical skills in managing our websites.