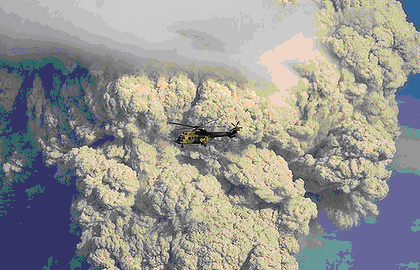 The Chilean volcanic ash cloud has struck again, creating havoc on air travel around Australia with flights grounded in Adelaide, Canberra and Sydney.

Qantas announced Sydney and Canberra flights will be halted from midday as the ash from the eruption of Chile’s Mt Puyehue Cordon Caulle volcano pushes east, leaving thousands of air passengers stranded.

A spokesperson for the Qantas group said “There is a Qantas group policy that we will not fly under the ash cloud due to the risks associated with it. We simply don’t know the density of the ash cloud and it’s a risk we are not prepared to take. Unfortunately this will mean flights from both Qantas and Jetstar will be impacted today.”

This is the second time that the ash cloud has circluated the Earth after flights were delayed across Australia and New Zealand last week. It is reported that the ash cloud is hovering in about 20,000 feet which is cruising altitude and is moving between 80 and 100 knots.

This will mean that the airlines are looking at some ongoing delays and are literally waiting to see which way the wind blows and how long it the cloud will hang around for.