Some 35 years ago, the arrival of the first BMW 3 Series identified the beginning of one of the most notable success stories in BMW model history. We were introduced to an entirely new vehicle that was both compact and sporty.  And then there was the most distinguished design feature of the front, which became BMW’s biggest and most recognizable feature even from a distance – the BMW kidney grille.

In the years since 1975, the face of the BMW 3 Series has constantly developed. The designers have always managed to incorporate dynamics, innovation and aesthetics into a well balanced, modern and future-oriented overall concept, whilst at the same time maintaining BMW’s traditional values.

As a result, each BMW 3 Series has retained its unmistakable brand identity and can be identified as a BMW at very first glance.

DRIVING SHOULD BE A PLEASURE. 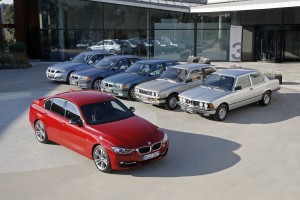 Every BMW is meticulously designed with near-perfect 50:50 weight distribution and rear-wheel drive to give you more precise steering, maximum traction and greater control. Put simply, it makes our cars more fun to drive.

When the 6th generation of the Ultimate sports sedan launches on 25 February, it will feature state-of-the-art engines, unequalled technology, which will include optional full-colour Head-Up Display that projects key data on the windscreen so you can take in information without taking your eyes off the road.

Reading about the all new BMW 3 Series Sedan in the enclosed brochure is one thing. Experiencing it for yourself is quite another.