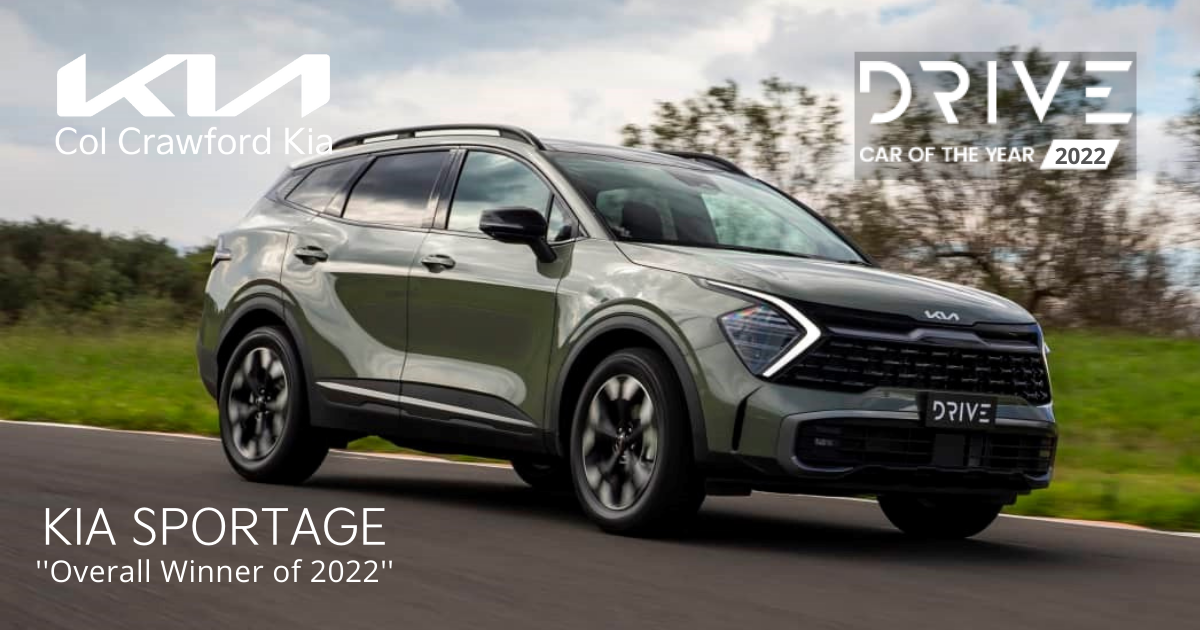 Written by Lani Waterman on March 17, 2022. Posted in Uncategorized

The 2022 Kia Sportage has beaten an all-electric Hyundai and Porsche, and a hybrid Toyota family SUV, to win Australia’s most coveted new car accolade, the 2022 Drive Car of the Year Overall award.

This is the second year in a row that Kia has taken our top prize, and stands as a testament to the incredible leaps in quality, design, driving engagement and value that Kia’s new-generation vehicles are making.

With 11 affordably priced variants kicking off with the Sportage S manual at $32,445 and stretching to $52,370 (before on-road costs) for the highly equipped Sportage GT-Line diesel, there’s a Sportage to suit all Medium SUV needs and budgets.

The Sportage not only beat the incumbent Best Medium SUV winner, the Toyota RAV4, to take this year’s category prize. It beat the deeply impressive Porsche Taycan electric sports car and the reliable, practical and affordable Toyota Kluger seven-seat family SUV to claim our peak accolade: Drive Car of the Year Overall winner.

Judges lauded the Kia Sportage in a number of areas, but chief among them was the Sportage’s benchmark-setting safety features, all of which are standard from the cheapest Sportage S to the most expensive Sportage GT-Line.

The Kia Sportage’s long list of standard safety equipment includes everything its rivals have, such as autonomous emergency braking, rear cross-traffic alert and lane-keeping assist, yet goes further by giving systems such as blind-spot monitoring and rear cross-traffic alert the ability to not only warn the driver, but also intervene to keep you out of harm’s way.

The Kia Sportage also has a new centre front airbag that prevents front seat occupants’ heads from clashing in a crash. This feature is already familiar to some luxury car owners, but the Sportage is one of the few cars in its class with one.

For starters, the Kia Sportage has grown in size this time around. It’s 175mm longer and rides on an 85mm longer wheelbase, which means it has more useable space inside, particularly in the back seats and cargo bay.

The cabin is a very classy affair, and technology integration and effectiveness are markedly better than before. The Sportage is best-in-class in terms of visual impressiveness and ease of use.

Sure, the flagship Sportage GT-Line has the most equipment, but even the Sportage S is generously equipped. It boasts a touchscreen entertainment system, wireless smartphone connectivity, LED headlights and tail-lights, alloy wheels and a full-size spare.

Judges tested all three of the Sportage range’s mechanical packages in the lead-up to, and during, Drive Car of the Year testing. The more potent 132kW 1.6-litre turbocharged petrol and 137kW 2.0-litre turbo diesel engines are both undeniably good, and they do take the spotlight away from the most affordable powertrain, the entry-level 115kW petrol four-cylinder, which is competent and economical.

On the road, the Sportage is a treat to drive. Variants with smaller wheel and tyre packages ride the most comfortably, but even the GT-Line diesel delivers a relatively cossetting ride while adding a touch of sportiness in the suspension tune.

The Sportage’s steering is light and well-weighted to balance higher-speed feedback with low-speed manoeuvring. Kia undertakes dedicated steering and suspension development work for the Australian market, and the stable yet comfortable ride, over some of the worst road surfaces Aussie roads have to offer, proves the effectiveness of this.

Much is made these days of hybrid powertrains and their fuel efficiency. The Sportage does not offer a hybrid option yet, but it doesn’t need to. Its suite of petrol and diesel engines are surprisingly efficient.

During testing, the Sportage GT-Line diesel (the heaviest and most powerful variant) returned a 6.5L/100km fuel average, exactly the same as a competitor’s hybrid powertrain on the same roads with the same drivers.

The Kia Sportage is the new benchmark in the biggest-selling vehicle category in Australia, and brings new levels of safety, affordability and refinement to that class.

That is why the Kia Sportage is the 2022 Drive Car of the Year Overall winner.