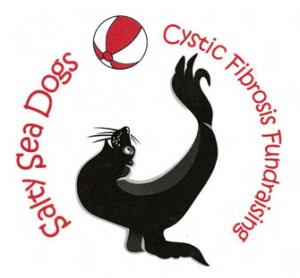 Little Mia Warren, my granddaughter, now nearly five years old, was diagnosed at 6 weeks with the condition known as Cystic Fibrosis, the most prevalent, life shortening disease affecting people of European ancestry.  The incidence in Australia is about 1 in every 3000 live births and about 1 in every 25 people are carriers of a genetic mutation responsible for CF.  Caused by the pairing of two recessive genes, it requires both mother and father to be carriers, a fact of which our family were unaware at Mia’s birth. 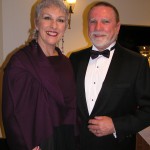 With each pregnancy, there is a 1 in 4 chance of the baby having the condition, 2 in 4 of being a carrier with no symptoms and 1 in 4 of being healthy.  The condition impairs the lungs and pancreas with thick mucus preventing normal function.  Physiotherapy is a daily and lifetime necessity as is the requirement to take pancreatic enzymes with each meal to aid digestion and food absorption.  Click Cystic Fibrosis for further CF reference.

On Saturday 16th July 2011 our family held their 4th Salty Sea Dogs Dinner at Peppers Anchorage, Port Stephens, in aid of Cystic Fibrosis Research.  The dinner is so-named because the sound Mia makes when she coughs (worse when she also suffered from Tracheo-malacia, which caused a partial flattening of the bronchial tubes) reminds us of a seal, also known as a salty sea dog, barking.  Therefore the logo was created and this year baseball caps have been made with the logo embossed, and are selling these to raise extra funds.

The theme of this year’s event was James Bond and invited guests to wear formal attire.  The tables were each named after a James Bond movie starring the particular guests seated, and the tables were adorned with over-sized martini glasses filled with water and candles, and placed on a mirrored disk.  The colour theme was red, black and white. Drinks were served in an adjoining room where guests could also peruse the items being offered for the Silent Auction, which included signed football jerseys from each code, selections of wine, magnums of Verve Cliquot, accommodation packages, a leather handbag, pre-paid telephone packages, a 1973 Commemorative Port and much more.  A raffle was also conducted on the evening with prizes including dinners donated by local restaurants, accommodation packages, clothing, beauty and theatre ticket prizes. 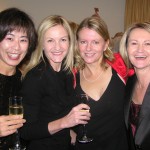 The evening began with Kent Warren, Mia’s father, my son, who is also the General Manager of the Anchorage Resort and always takes the role of MC, arriving into the room to the James Bond theme being played and shown on the screen, wearing full wet suit and brandishing a toy gun before stripping

own to his dinner suit underneath and ordering a martini from the nearby waiter.  It was all great fun and totally unexpected even by those who had organised the evening!

There was a delicious menu created by the Anchorage team, with all meat, seafood, wines and beers for the evening, donated by local suppliers, allowing an even greater financial outcome for the fundraiser.

Games of Heads and Tails had a James Bond theme and centred around True or False questions based on the films, their stars and characters.  The guest speaker on the evening was Dr Adam Jaffe, a respiratory specialist from the Children’s Hospital at Randwick who discussed the condition of Cystic Fibrosis and where research is taking those afflicted. 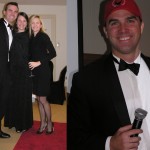 After dinner, the Loud Auction was conducted by Paul Gamer, a local licensed auctioneer whose professionalism and humour make for a most entertaining and successful auction.  Prizes included fabulous accommodation packages donated at the major Peppers Resorts around Australia, Qualia accommodation on Hamilton Island, accommodation at Peppers Beacon Hotel Queenstown, New Zealand together with a Golfing Package at the nearby The Hills Golf Course, a golfing package for 16 players at our local Pacific Dunes Golf Course, and of course, the BMW Baby Racer donated by Col Crawford Motors which raised the phenomenal sum of $1050!!

An amazing figure of over $33000 was raised on the evening thanks, not only to the generosity of those attending on the night, but to the individuals and companies who donated prizes, goods and services for this worthy cause about which we are so passionate.

The monies raised have been sent to Cystic Fibrosis NSW for use in research into a cure for this, as yet incurable, and life-debilitating and life-truncating disorder. We are in the process of determining a date for the 2012 dinner which will, once again, be held at Peppers Anchorage, Port Stephens.

For more information regarding this event, please email Nikki.