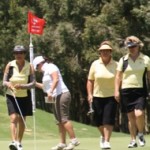 When we spoke to them, they are so excited they can hardly speak.  They are off to the presentation dinner and although they don’t have all the details of their prize as yet, we think they may have won 3rd place over all.  There were 25 mens teams and 4 ladies teams and these final rounds were a combined field.

Here are some articles from the PGA website from Saturday & Sunday.  The photo shows 3 of our girls in the Cromer GC colours (yellow & black). We will keep you posted as more news comes to hand.